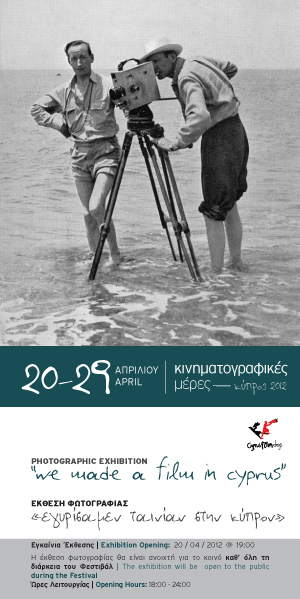 On the opening night, the festival launches a photographic exhibition inspired by the documentary film ‘Cyprus is an island’, which was shot on the island in 1945, commissioned by the British Ministry of Information. The black and white film, which runs for 34 minutes, records Cyprus through a colonial point of view. However, it is considered one of the few cinematographic records we have for Cyprus of that period.

The director and producer of the film is Ralph Keene, an important British documentary maker and film producer of the decades 1930- 1960 (Journey into Spring,1958, Under Night Streets, 1958, The people’s land, 1943 etc.).  The scriptwriter was poet and author Laurie Lee, who would later become famous for his novels and poetry (Land at war, 1945, The Firstborn,1964, Two Women. 1983 etc.). The production company was Greenpark Production.

Three Cypriots participated in the making of the film as assistants: Michael Cacoyannis, taking his first steps in filmmaking appears perhaps for the first time in the credits of a film, Polys Constantinides and Ahmet Jemal. The film score was taken by “Greek Suite”, written by Greek composer Petros Petrides. All the participants featured in front of the camera are Cypriots while the main subject of the film is Cypriot landscape and life in Cyprus in the mid 1940s.

In 1947, upon completing the shooting of the documentary, Ralph Keene and Laurie Lee published a book/ journal with detailed descriptions of the pre- production and the filming process, along with photographic material. The book is entitled “We made a film in Cyprus”.

The exhibition, also entitled ‘We Made a Film in Cyprus’, will present photographs from this book/ journal written by the filmmakers.

The exhibition is curated by photographer Vassos Stylianou and producer/ director Adonis Florides.

The exhibition will be inaugurated by the Mayor of Limassol Mr Andreas Christou, on April 20th at 7 p.m. The opening ceremony will include a presentation of the book/ journal by photographer Vassos Stylianou, who will emphasise on the content of the photographs featured in the book. The documentary film “Cyprus is an island” will be screening in a loop throughout the festival at Art Studio 55.

Special thanks to Pearson Education, UK for granting permission to reproduce images from the book «We made a film in Cyprus»